New coach, no problem: Central Gwinnett boys soccer is in the hunt 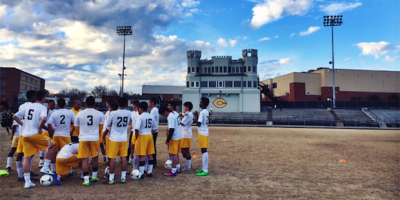 Central Gwinnett rose to No. 1 in 7A. Credit: Cent. Gwinnett HS

The Central Gwinnett boys soccer team had been dormant for several years ever since their strong 2015 season, which resulted in a region championship. Now the Black Knights are ranked No. 1 halfway through their first season under head coach Mike McLean and look as if they could take the next steps toward becoming an elite program out of Class 7A, Region 7.

At the end of the 2017 season, four-year head coach Cory Morgan decided to part ways with Central Gwinnett. Morgan had plenty of experience in soccer, holding the national record for assists in a high school career (163) and playing at Lenoir-Rhyne college in North Carolina. During his time as head coach of the Black Knights, he led his team to four straight state playoffs, was runner-up in the 2014 region tournament and won the 2015 region tournament. It was no secret that the position of head coach would be a tough one to fill, but the hiring of long-time soccer coach Mike McLean proved to be exactly the right fit for the program.

“I was excited,” said McLean. “I knew it would be a challenge. We play in a good region and every game is a big contest. [Morgan’s] time here was great, I knew I had some pretty big shoes to fill.”

The former collegiate player attended Tusculum College in Tennessee for four years where he not only played soccer but acted as placekicker for the football team for a season. After his college career, McLean took up as an assistant soccer coach at Tusculum, where he stayed for four seasons before moving to Knoxville and coaching the Club Impact USA and Karns teams.

McLean experienced prosperity on the pitch in 2009 after he took over as head coach of the newly started Hardin Valley boys soccer team.

“When the spot opened up, I jumped on it,” McLean said. “It was an opportunity to create tradition the way that I wanted.”

During their inaugural season, the Hawks advanced to the semifinals of District 3-AAA and followed up next year with a second semifinals appearance in Region 2-AAA. The team really hit its stride during the 2011 season, defeating the Farragut Admirals for the first time in school history and winning the state championship in just the third year of the team’s existence. He was named the 2011 Knoxville News PrepXtra Coach of the Year. After his success in Tennessee, McLean was eager for the chance to take over the Black Knights program

“I knew they were a good team,” said McLean of Central Gwinnett. “They had talent, but it was important to gain good team chemistry among the players too.”

The Black Knights hit the ground running in 2018, accumulating a nine-game winning streak since their commanding 7-2 victory over Northview on opening day. Their most recent win over Brookwood, a 3-1 victory on March 20, highlighted some of the team’s key players and marks the third time the team has bested the Broncos in four seasons.

Miguel Gonzalez’s skill on the ball allows him to create offensive opportunities. His cross in the penalty box created a scoring play for Jose Espinosa, who capitalized by burying the goal to put the Black Knights up early.

“He’s the spark of our offense,” McLean said of Gonzalez.

Sophomore Milton Alfaro would add to the lead in the 25th minute with a header into the back of the net.

“He’s the true workhorse up and down the middle of the field,” McLean said.

Brookwood would manage to score 10 minutes into the second half, but a well-timed cross from Gonzalez set up a second goal by Espinosa to secure the win.

Just three days after the electric win, the team was served its first loss on the year after a tough 2-1 loss to second-ranked Norcross in extra time on March 23. But the Black Knights have no intention of letting their one blemish disrupt this promising season.

“Every game is usually a one-goal game,” said McLean. “Norcross is a really good team, we have nothing to hang our heads about. We’re going to move forward and take on Parkview, another really good opponent and see what we can do.”

The Black Knights take on Parkview on Tuesday on the road as they continue to try to position themselves for the school’s first soccer state title.

No Replies to "New coach, no problem: Central Gwinnett boys soccer is in the hunt"