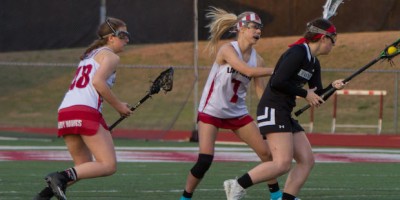 Last year’s Hillgrove girls lacrosse team continued the program’s rise to prominence, boasting a 13-5-1 record and garnered an honorable mention for All-State in senior defender Samantha Flowers. The Hawks ended their 2017 season in the second round of the playoffs with a tough 18-2 loss to top-ranked Milton, which went on to claim the program’s 11th title in the past 13 years.

Though the loss was significant, the team’s strong performance during the season shot them up in the statewide rankings and secured the Hawks a spot on the map. Now with a 4-3 record in their 2018 season, they’re looking to prove they have earned that recognition.

Hillgrove has scored double-digit goals in all games but one, a 16-6 loss to Harrison. A commanding 20-8 win over North Atlanta featured the high-scoring offense at the peak of its game. Perhaps their most impressive performance came one day later on March 11 as they took on the Gulf Breeze Dolphins out of Florida.

The two teams have met during previous seasons, but the Hawks had yet to walk away victorious. In the first game of the 2016 season, the Dolphins took it to Hillgrove down in Florida and served them a tough loss, but head coach Keon Humphries was able to find a positive takeaway from the game.

“We took a beating,” he said. “But it was good exposure.”

Their next matchup came in the middle of last year’s season when the Hawks again made the journey to Gulf Breeze, which is near Pensacola on the panhandle. After 50 minutes of play, both teams ended the game with nine goals, resulting in the only tie for both teams throughout the year.

This year’s contest between the two would result in an outright winner. The Hawks offense put on a show, fueled by the duo of juniors Aubrie Valvo (6 goals) and Arianna Rivera (3 goals).

“We played the game the right way,” Humphries said about his team’s play. “We played unselfish ball.”

The Hawks never eased off the gas and blew out the Dolphins 15-6.

The Hillgrove offense continued to shine after the striking win over Gulf Breeze, taking down Sprayberry 14-4 after another compelling performance. Rivera scored six more goals, while junior Kendal Johnson scored twice. The six other goals by the Hawks were scored by six different players, a true display of the depth within this team.

“Over the past few years we’ve had girls come in from our training program. Their knowledge of the game has increased over those years,” Humphries said.

“These two games are highlight games for us,” said Humphries. “Do you make a game plan for them, or just do what’s best for your team? These past few weeks have allowed us the time to get fine-tuned for these big games.”

No Replies to "Hillgrove girls lacrosse continues climbing the ladder"