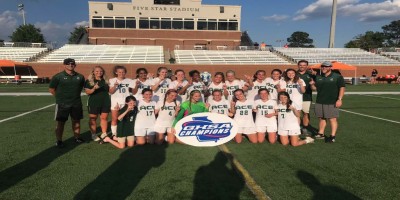 Wesleyan won its second girls soccer championship while Pinecrest Academy was trying for its first-ever title.

Lucy Mitchell, who finished the match with two goals, started the scoring with 36:05 left to play in the first half. She added another goal with 16:37 before intermission to push the lead to 2-0 for the Wolves.

Pinecrest found its lone goal on a header from Ivey Crain with fifty-three seconds left to play in the first half to pull the Paladins to within a goal but that’s as close as it would get. With 22:11 to play, Wesleyan’s Ashley Cowart added a score which put the game out of reach.

Wesleyan came back from a 1-0 deficit as it captured its second boys soccer title over Whitefield Academy, the 2017 Class A champions.

Whitefield struck first on a goal from Wes Peterson off a rebound with 14:55 to play in the opening half, forcing Wesleyan to respond. The Wolves did on a long goal from Liam Coxhead with six minutes left before intermission and the teams went to the locker room tied. In the second half, Wesleyan struck on a Harrison Larner goal with 33:14 left to play to put the Wolves up for good.

The Academy for Classical Education Gryphons won their first-ever state championship after just one year of varsity competition.

ACE did its scoring in the first half while holding Atlanta Classical scoreless. With 24:49 left in the first half, ACE pulled ahead on a goal from Paige Suk. The Gryphons pushed the lead to two goals on a score from Lauren Applebee with 34:28 left before the half.

After an extended lightning delay that began with 26:31 left in the game, Georgia Military won its first-ever boys soccer title with a victory over Lake Oconee Academy in overtime.

Lake Oconee took the lead first on a goal by John Clay Wofford with 28:55 left in the first half. Georgia Military responded with a goal by Logan Steinmeyer with 35:51 left in the game and that’s where the score would stand at the end of regulation.

In the extra time, Dylan Smith put the Bulldogs ahead 2-1 with eight minutes left in the overtime period and Georgia Military held on for the victory.

Westside star Khavon Moore announces where he will transfer to. Here is what we know