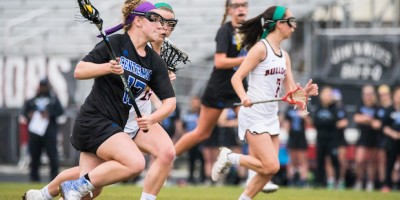 The Centennial girls lacrosse team’s 17-12 loss to Roswell on Tuesday marked the first blemish of their 2018 season. The Knights started their 2017 season off with nine straight wins before ultimately losing the majority of their remaining games. Now, after putting together another 9-0 run before their loss yesterday, the No. 8 Knights are out to prove that they can keep up their strong play for the rest of the year.

“This season we have really been focused on our goals,” said head coach Emily Perling. “We have team goals and individual goals that are set before each game. I think this helps us to stay focused on improving every moment we are on the field. When we achieve one goal, we celebrate it and then we add another. This season our seniors chose the team theme to be ‘accept the challenge.’ This has helped us stay focused that every practice and every game is a time to get better and a challenge to be won. We have been successful doing what we are doing, so if we can stay focused on our plans and play our style of lacrosse, we will continue to do well.”

Since taking over for longtime head coach Jill Irwin, Perling has led Centennial to two winning seasons and a 2016 playoff appearance after a two-year drought away from the postseason. Now, well into her third season as head coach, Perling and the Knights are looking primed for another playoff push.

The Centennial offense has been a force to be reckoned with, averaging just under 20 goals each game while allowing just a bit above six.

“Our team is very close this year,” Perling said. “Team chemistry is something I spend a lot of time on, and their chemistry off the field definitely translates on the field.”

“We also have a very strong sophomore class,” Perling continued. “Many of them played on varsity last year, and now they have gained confidence to truly be game-changers. The draw has been a big part of our success. We have a handful of girls who can take the draw and those who can be on the circle. Having so many strong choices allows us to quickly adjust if one is not working. Those extra possessions that we are winning have translated into our successful offense.”

The Knights’ most recent win came after an 18-11 outing against Creekview, displaying quality offensive performances from several players. One standout performance came from junior Christina Fabrizio, who was leading the Knights offense with 35 goals and 12 assists heading into Tuesday’s game. Her five goals against Creekview helped fuel the offense, along with Haleigh Allario, Maria Fabrizio and Amelia Wright, who all scored three.

The responsibility of holding down the midfield has been left to sophomores Ella Hancock and Abby Teffeteller.

“Hancock and Teffeteller have been forces all over the field,” said Perling. “Ella has accumulated 48 draw controls, 21 goals, 15 assists and 14 caused turnovers. Her speed and lacrosse IQ make her a huge threat on defense, where she leads the team in caused turnovers. Teffeteller is second on the team in draw controls with 25 and then has 10 goals, eight assists and 12 ground balls. Offensively our biggest strength is our balanced attack. Every game we have played in we have had at least six different scorers, and we have tallied 11 different goal scorers in multiple games.”

While the offense has been playing lights-out, the defense has stood strong as well.

“Defensively they all work really well as a unit,” said Perling. “We have made some changes this year to our defensive mindset and we are seeing the rewards. We have three juniors starting on our defense in Kamryn McNeil, Callie Rigsbee and Libby Wehr. Their vocal leadership and willingness to try new things has allowed our defense to use our speed to create turnovers.”

At the halfway point of the season, Centennial’s undefeated streak is over, but the Knights have no intention of letting one loss throw them off their course.

“In that game we did not do the things that have made us successful so far,” said Perling. “We will watch film and learn from it. I think this loss will help us refocus on the mindset we set for the season. I know we will come back stronger on Thursday. I tell the girls every day that we have to be better than the day before. It is simple but true. We have to continue to have the determination and focus on making ourselves better. If we do what we need to do, it does not matter who we are playing. We have such a talented group of girls, and if they continue improving throughout the season, I know we can be unstoppable.”

The Knights’ next game is Thursday as they take on Brookwood.

New coach, no problem: Central Gwinnett boys soccer is in the hunt